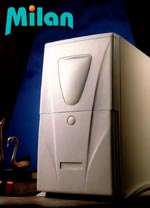 The goal was to develop a computer hardware with a Motorola 68040 processor which could be equipped with low priced standard PC components and is fully software compatible with existing Atari computers.

Previous Atari Systems lacked the existence of standardized ports to use the cheap components of the PC mass market.
In the beginning of personal computers that was no disadvantage, but due to the growing spread of IBM compatible PCs this changed. The components became low priced and there were no more need to develop everything on your own.

The base for the new operating system was the TOS 4.04 from the Arari Falcon. It was completely stripped down, reworked, cleared out and reassembled. Beside the integration of some new parts the main advantage was the Flash memory offering the ability of making software updates without disassembling the computer and exchange the ROMs, as in the previous ones.

In major parts the new motherboard looked like a PC motherboard, but the center piece was still a Motorola processor. Another typical Atari part was the MFP which could not be spared because of the various timers.

The main memory could be expanded up to 512 MByte with at this time usual 72 pin EDO-Ram modules.

We used a PLX9080 as north bridge and with a trick we made it into becoming a bus master without processor intervention. The glue logic was realized with two Latice CPLDs.

The ISA bus was connected via an Intel south bridge, which also offered the two enhanced IDE ports.

Besides the Flash a Super I/O chip from National was attached to the ISA bus, offering the rest of the interfaces, as Floppy, Keyboard, Mouse, two serial ports, one parallel port and the real time clock with the NV RAM. On the picture on the upper left we used an AMCC chip as a placeholder, because the National Super I/O were not delivered at this time. On the following picture taken some time later you can see the National chip.

The big challenge: starting up the system.

Before the processor can execute it's first byte of code the whole hardware needs to be up and functional.

And all this effort to use a low priced 8 bit Flash memory. At runtime the whole operating system is copied into the main memory to be executed with 32 bit at full speed. 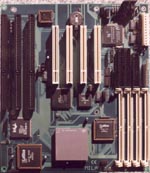 Because the Atari Mega STE and Atari TT were equipped with a VME-Bus, we developed a PCI / VME-Bus for the Milan fully software and hardware compatible to the original Atari VME-Bus.
With a driver it was also possible to use the card in a normal PC.

For the expansion of the Milan 040 we developed a pluggable expansion card for replacing the Motorola MC68040 with a MC68060.

The circuit diagram is available on our download page.

Unfortunately we never produced the Milan 060 in series.

The Atari Coldfire Projekt is another attempt to revive the Atari.

The circuit diagrams are available on our download page.

Tos2Win was a software emulator for using Atari programs under a Windows operating system. A small selection of features were up to 14.5 MB ST-RAM, up to 2GB TT-RAM, the use of all Windows drives including network drives and usage of parallel and serial ports. The main attention was laid on the compatibility and speed of Calamus.

As unique feature of the emulator the Atari programs were simply running in a window as other real Windows program but unfortunately most of the Atari users missed their familiar Atari desktop.

It works well with Win95, Win98, NT3.5 and NT 4.0. If somebody wants to give it a try, he can find a version in the download area. Otherwise is here a link to the more modern STEmulator.